Filling Need
Buster’s seeks to be “Bass Pro of Booze"

Buster’s Liquors & Wines’ longtime East Memphis presence is about to get even bigger.

The third-generation family business, which began in 1954, has been in the University Center near the corner of Poplar Avenue and Highland Street since moving into its original 800-square-foot space in 1970. 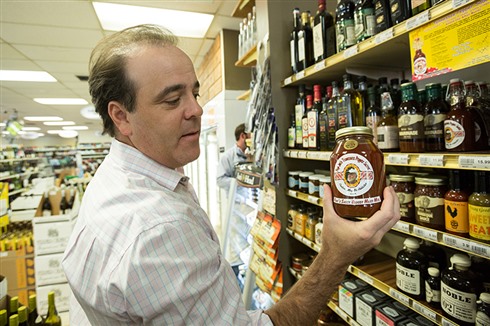 That legacy is growing Friday, Sept. 11, with the opening of the first phase of an expansion that will see Buster’s grow from the current 10,000 square feet to a spacious 16,000 square feet. It will feature more room for liquor, wine, an expanded food section, large beer growler station, tasting stations and more.

“Not only will we be able to sell more products, we’ve been needing to expand for years,” said Buster’s president Josh Hammond. “At the end of the day I’m looking forward to this being the Bass Pro of booze.”

Hammond says the expansion will expand the store's office, warehouse and cooler capacity. It is tripling its cooler space from 12 to 32 doors. But aesthetics played a role as well.

“At the end of the day, we hope it will look better," Hammond said. "This store has some nostalgia and history, but it really did need an update. People know us for being more down home and I want to retain that. It’s not going away.”

The expanded store will have a much larger selection of beers, including a growler filling station. All the products will be featured on new shelving that will allow for sightlines across the store.

The growler station will feature eight taps with a focus on local and seasonal beers. Hammond said Buster’s will be the first location in Memphis to use the Pegas draft beer system, which seals and keeps growlers fresher longer.

“We’re not trying to be the mother of all growler distributors, but we want to focus on some items that don’t come in bottles or cans,” he said.

The growler station will be part of a larger beer/spirit tasting area that will host special tastings with winemakers, master distillers and brewmasters on a regular basis. There will be one on the beer side and one in the wine space in the front of the store.

“What we’re looking for is enhancing the customer experience,” Hammond said. “It’s not just about buying a bottle and getting information from the clerk.”

Buster’s currently offers some food items, but the expansion will allow for a much larger selection of meats and cheeses. It won’t seem like a butcher shop, Hammond said, but there will be a great selection of local packaged cheeses as well as some from outside the region. A new 12-foot wall will feature an open fridge that will house the food items.

“We’ve left room to almost double that and put in another wall unit, but we’ll crawl before we start walking,” Hammond said. “We’ll expand those cold food items and then also have shelf items, like olive oils and caramels.”

An updated look and more floor space to store additional products is only part of the reason for the expansion. The technology side of the store will be upgraded with new equipment that will increase Internet speeds 10 times. Checkout will be more convenient with an increase to 10 registers from the current five thanks to kiosk areas.

And yes, there is a need to wow the community that in 2016 will have the opportunity to buy wine in grocery stores.

But this isn’t a reaction to legislation as much as it is a way to firm up Buster’s commitment to a customer base that has been loyal to the store for decades, Hammond said.

The legislation “was the icing on the cake,” Hammond said. “The bill being passed forced our hand that we need to step up our game.

"We are the top retailer in the state as far as volume. We have 1,000 people on average walk through the doors a day, and that’s huge. We’re looking to wow our current customers and draw in even more.”

Buster’s stocks some 10,000 items, including a number of boutique items on the spirits side, and has been recognized in years past as being one of the top wine stores in the U.S.

And with the Tennessee legislation that allows wine sales in grocery stores, businesses like Buster’s now can sell beer of all varieties instead of just the high-gravity selections that were the case prior to the change.

“The craft beer explosion will be a major player of our expansion,” Hammond said.

While the first phase of the expansion into the new space will open Friday, there still will be a transition for customers. The new space expands the store beyond its western wall. Customers will continue entering through the main east-facing doors but will walk through what has been the beer section to access the new space.

Next up is a renovation of the current space with an expected completion date before the busy holiday season.

Back to Our Blog